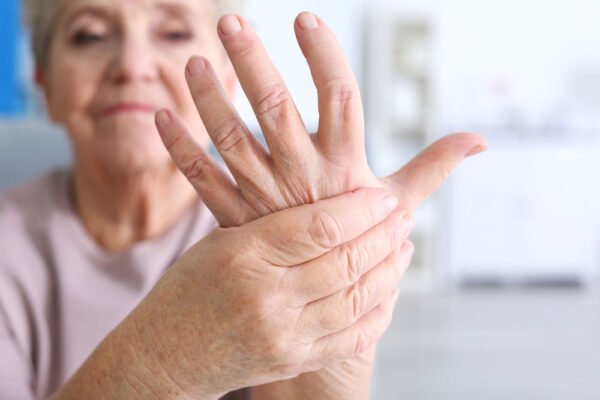 According to the CDC, 23% of all adults in the United States suffer from some form of arthritis. Out of those 54 million Americans, more than 1 in 4 report severe joint pain. While the majority of these cases represent the elderly community, a significant portion of 18-44 year olds are affected by the condition as well.

Although we have yet to cure arthritis, medical understanding has greatly increased in recent years with particular relevance in anti-inflammatory agents. Application of this research is greatly needed as many of the current drugs prescribed are painkillers which only treat the symptoms and leave the underlying causes unaffected.

Arthritis is the swelling and tenderness of one or more joints that causes pain, stiffness, and a decreased range of motion that typically worsens with age. The two most common forms are Rheumatoid Arthritis and Osteoarthritis.

Rheumatoid Arthritis (RA) is an autoimmune disease that has been shown to cause joint pain, inflammation, and damage throughout the human body. One trait specific to RA is that the joint damage most commonly adheres to a bodily symmetry, meaning if a joint in one arm is affected, then the same joint in the other arm will most likely be affected. This is one of many ways that doctors differentiate between the different types of arthritis.

RA is a chronic illness that displays the worst of its symptoms in periods of varying length commonly known as exacerbations or flares. Patients may also undergo periods of remission where some symptoms may disappear completely.

An early diagnosis is key to avoid an increased severity of symptoms that can lead to complete loss of joint function as well as deformities. Rheumatoid Arthritis is not considered a hereditary disease, although it does appear to run in families. This may be due to a combination of environmental and genetic causes.

The other main type of arthritis, Osteoarthritis, is much more prevalent in the world. The US National Library of Medicine names osteoarthritis the most common joint disease in the United States, and that number of people affected is likely to increase due to an aging population and the current obesity epidemic.

Obesity has been shown to affect more than one aspect of osteoarthritis. Increased weight adds unnecessary stress to weight-bearing joints, such as the hips and knees. Also, fat tissue increases the number of proteins that can cause inflammation in and around joints.

Osteoarthritis is a degenerative disease that worsens with time causing chronic pain. The pain is known to commonly lead to sleep disturbances and depression.

Some healthcare providers recommend certain anti-inflammatory diets and foods to help manage all aspects of the disease from pain to joint damage. These include foods high in omega-3 fatty acids such as:

During a study conducted by Muerzzuschlag State Hospital in Austria, twenty-three patients with moderate to severe active rheumatoid arthritis were given a solution containing either 0.2 g of fish oil, or a saline infused placebo, and tested for 14 consecutive days. Researchers observed that the group given the fish oil had significantly lowered swelling and tenderness of joints. Another group was given a mere 0.05 g of fish oil for 20 weeks and were observed as having inflammation levels even lower than the previous group.

It is also important to avoid foods that may trigger inflammatory responses. These may be foods containing processed carbohydrates, saturated fat, and trans fat.

In 2016, a review of randomized clinical trials regarding the efficacy of turmeric extracts and curcumin on arthritis was published by the US National Library of Medicine. They discovered that turmeric extracts taken daily at a dose of about 1000mg seemed to result in a general decrease of arthritis symptoms.

This is most likely due to Curcumin (the main active ingredient in turmeric) and its well documented ability to inhibit inflammation and oxidative stress.

Bromelain is a protein-digesting enzyme derived from the stem, fruit, and juice of pineapples. It has been demonstrated throughout the years to contain analgesic and anti-inflammatory properties which makes it a contender to be a safer alternative or adjunct treatment for both rheumatoid arthritis and osteoarthritis.

A series of three week placebo controlled studies by the University of Southampton concluded in multiple trials that 540mg of bromelain administered daily significantly reduced inflammation in 72.4% of cases while reducing pain caused by the inflammation.

While both the cure, and causes for arthritis remain unknown, there are several immediately applicable natural remedies that may both alleviate symptoms, and relieve patients of unnecessary opioid dependencies. With proper funding and awareness, research can continue to progress to previously unseen heights leading to increased degrees of application within our society. Only through increased research and availability of treatment will we be able to lessen the debilitative effects caused by this chronic affliction.