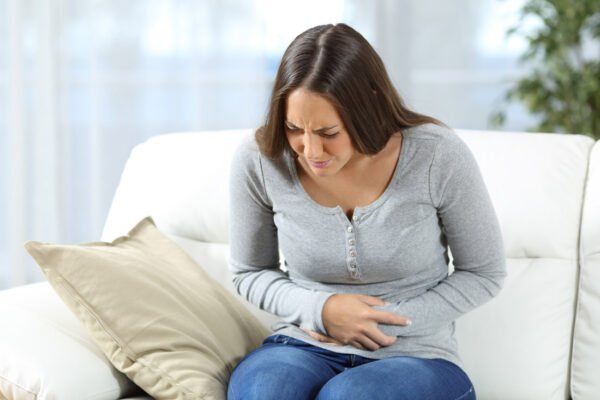 Gastritis is inflammation of the stomach. The cause, symptom, severity, and duration fluctuate on a case by case basis. The majority of cases are caused by the bacterium helicobacter pylori, which is estimated to infect 50% of the world’s population. This makes chronic gastritis an extremely frequent affliction.

Here we will take a closer look at the symptoms, possible causes, and treatment options.

A large portion of people with gastritis will experience no symptoms at all, although upper central abdominal pain is the most common symptom. This pain can range from a dull burning to a sharp soreness. Although the pain is usually centered in the upper central region of the abdomen, it can occur anywhere from the upper left abdominal section all the way to the back.

Other symptoms can include, but are not limited to:

In severe cases left untreated, chronic gastritis can lead to stomach ulcers and even stomach cancer.

Helicobacter pylori has colonized the stomach of half the world’s population and is a key pathogen responsible for a number of related diseases. Once the gastric mucosa has been colonized by the bacterium the host begins to develop chronic gastritis.

Another common possible cause is frequent use of nonsteroidal anti-inflammatory drugs (NSAIDs). NSAIDs inhibit cyclooxygenase-1, or COX-1, an enzyme necessary for proper stomach function. This leads to an increased risk of peptic ulcers to form. They also lower the amount of lipid compounds that protect the stomach. While irregular use of NSAIDs typically is not dangerous, frequent use can lead to the development of several adverse health conditions.

Another cause of gastritis is irritation due to excessive vomiting or use of alcohol. Bile reflux, a backflow of bile into the stomach, as well as various bacterial and viral infections, can also cause gastritis symptoms to develop.

Certain surgeries, such as a weight loss surgery resulting in a reconstruction of the digestive tract, are another known cause of gastritis development.

If the patient’s gastritis is known to be caused by helicobacter pylori then doctors can introduce a regimen of several antibiotics. It is also recommended to eliminate irritating foods from your diet.

Antacids are a common initial treatment option for mild to moderate cases. If these do not work then they are often supplemented with other drugs such as H-2 blockers or proton pump inhibitors to reduce stomach acid. Although these may work, they are unable to be used long term, leading scientists to seek better treatment options.

In the last few decades, evidence has accumulated supporting the idea that gastritis and gastric ulcers show a resistance to antibiotics. That coupled with the possible side effects of antibiotics as well as acid inhibitors have led researchers to pursue the role several probiotics strains could potentially play in combating this condition.

In a 2013 study, researchers at the University of Calgary in Alberta, Canada investigated the effects of a probiotic mixture on gastric ulcers. A mixture of eight probiotic bacteria including Lactobacilli, Bifidobacteria and Streptococcus species were given to rats at varying doses for 14 consecutive days.

The treatments significantly enhanced the healing of gastric ulcers in a dose-dependent manner. VEGF, an angiogenic factor which accelerates gastric ulcer healing, was shown after only 7 days to have increased 332-fold as compared to the control animals in the experiment. This result was not seen as prominently on day 14 of the trial, but that was primarily because the majority of ulcers were already healed by that time.

In a separate study conducted by the Yakult Central Institute for Microbiological Research in Tokyo, bifidobacterium bifidum and Streptococcus thermophilus were administered separately to determine their individual effects.

Each probiotic strain was given to a separate group of rats, and then gastric injury was induced two hours later. The gastric injury rate was determined to be significantly lower in the rats given the Bifidobacterium bifidum and gastric mucin production in stomach samples was shown to increase in this group only. These findings indicated to the research team that Bifidobacterium bifidum has the potential to provide gastroprotection and alleviates acute gastric injury by enhancing the production of gastric mucin in a rat model.

Black raspberries, elm trees, and cape jasmines have been used for hundreds of years in traditional Chinese and Korean medicine for treatment of various gastrointestinal issues. A 2019 study by the Korea Research Institute of Bioscience and Biotechnology evaluated the efficacy of these plants for use in gastrointestinal remedies.

The plant extracts were given both individually and in combination to rats with induced gastritis and stomach ulcers. An even ratio of extracts at a dose of 150mg/kg was shown to dramatically produce anti-gastritis effects having a 77% inhibition rate.

Researchers concluded that “combination of black raspberry, elm, and cape jasmine might be a significant systemic gastroprotective agent that could be utilized for the treatment and/or protection of gastritis and gastric ulcer.”

We recommend consulting with a doctor before making any changes, but there is good reason to suggest that these natural remedies may be a good supplement to current treatment regimens being prescribed. With more research undoubtedly on the way, we can likely expect an increase among the scientific medical community regarding the recognition of these effects.