Probiotics are good bacteria that reside within the human body, namely the gut, and have positive health benefits. Lactobacillus acidophilus is a probiotic species of bacteria.

What is Lactobacillus Acidophilus?

Lactobacillus acidophilus is found naturally within the human body, in the gastrointestinal tract and mouth.[1] It can also be found naturally in yogurt and other dairy foods. It is commonly used as an additive in certain food products as well.[2]

According to the Encyclopedia Britannica, “various species of Lactobacillus are used commercially during the production of sour milks, cheeses, and yogurt, and they have an important role in the manufacture of fermented vegetables (pickles and sauerkraut), beverages (wine and juices), sourdough breads, and some sausages.”[3] It’s also sometimes added to infant formula.[4]

Lactobacillus acidophilus in particular has been used to fight off infection and promotes a normal balance of bacteria in the intestinal tract.[5] It is taken as a supplement to improve digestive disorders, for the treatment of vaginal inflammation, and people commonly take it to promote overall health.[6]

Multiple studies have shown that lactobacillus acidophilus is “known to inhibit the growth of bacterium Campylobacter pylori, which is associated with stomach ulcers, in the human gastrointestinal tract.”[7]

May be effective in lowering cholesterol levels: in a study done in pigs, researchers found that “certain strains of L.acidophilus act directly on cholesterol in the gastrointestinal tract”.[9] High cholesterol levels can lead to conditions such as heart disease.[10]

Researchers from the Metabolic Research Group posited that regular consumption of fermented milk containing lactobacillus acidophilus “has the potential of reducing risk for coronary heart disease by 6 to 10%”.[11]

A study on rats that were fed skim milk fermented with lactobacillus acidophilus also had a similar finding: that cholesterol levels were reduced.[12]

Cholesterol levels were reduced in a study on adult human males as well. A study published in the European Journal of Clinical Nutrition found that serum cholesterol levels were reduced in “normal healthy male adult subjects with borderline elevated levels of serum total cholesterol”. Researchers in this study observed the effects of consuming a milk product fermented by Lactobacillus acidophilus and with fructo-oligosaccharides three times daily.[13]

Women’s health: a study on the effects of consuming yogurt containing lactobacillus acidophilus in women with recurrent candidal vaginitis was performed over a 6-month period. The study found that daily ingestion of the yogurt “decreased both candidal colonization and infection.”[14]

Fights against infections and disease: a report published by the Journal of Food Protection found that lactobacillus acidophilus exerted antagonistic actions toward foodborne pathogens in laboratory cultures.[15] The sensitivities of the diseases in the presence of lactobacillus acidophilus varied, but included salmonella typhimurium, staphylococcus aureus, clostridium perfringens and E. coli, all of which can be deadly.

A separate study found that acidophilus significantly improved eradication rates of H. pylori when added to a normal anti-H. pylori regimen.[16] H. pylori a bacterial infection that in most people causes no symptoms but can lead to stomach lining inflammation, ulcers stomach cancer.[17]

Based on the results of studies in mice, r from the National University of Tucumán in Argentina concluded that milk fermented with and acidophilus could be used to prevent infections within the gastrointestinal tract.[18]

Lactobacillus acidophilus may also decrease the risk of cancer: in a study conducted on mutagenized rats, evidence indicated that the risk of colon cancer could be reduced in rats.[19]

Activates the immune system: in a study done on Swiss mice, researchers found that when administered a diet of milk fermented with lactobacillus casei and lactobacillus acidophilus, phagocytic and lymphocytic activity increased, suggesting that the bacterium can influence the level of activation in the immune system.[20]

Could be effective in the treatment of diabetes: in a study performed on diabetic rats which were fed a diet of probiotic (a type of fermented milk) containing acidophilus and , of glucose intolerance, oxidative stress, dyslipidemia, hyperinsulinemia hyperglycemia was “significantly delayed”. This indicates a lower risk of diabetes and its resulting complications in mice.[21]

Relief from diarrhea: in a study of women with cancer who were undergoing radiation therapy, subjects who received a milk product with live lactobacillus acidophilus cultures had less radiation-associated diarrhea. The participants who consumed the milk product, however, had increased flatulence, likely “due to lactulose ingestion in the test group.”[23]

Milk product containing lactobacillus acidophilus and Lactobacillus casei also had a preventative effect on diarrhea caused by antibiotics in hospitalized patients. This study also concluded that it was safe for consumption.[24]

Could prevent the development of allergies: this study conducted at the College of Human Ecology in Seoul National University in Korea on eczema in high-risk infants found that administering a mixture of lactobacillus acidophilus along with B. lactis and B. bifidum was an effective approach in the prevention of the condition.[25]

Benefits patients suffering from irritable bowel syndrome: researchers from this study observed a beneficial therapeutic effect in IBS patients who took lactobacillus acidophilus but that further study is needed.[26]

The most common form of lactobacillus acidophilus is in capsule form. It can also be found as powder, tablets, wafers and vaginal suppositories.[27]

In a study conducted at the Western Dairy Foods Research Center of Utah State University, researchers “demonstrated that probiotic ice cream is a suitable vehicle for delivering beneficial microorganisms such as L. acidophilus and B. bifidum to consumers.” They also found that “bacteria can be grown to high numbers in ice cream mix and remain viable during storage.”[28]

It’s worth noting however that there are a number of lactobacillus acidophilus-infused yogurt and dairy products on the market but there is concern among some in the medical and scientific communities as to the number of viable cultures that last from the manufacturing process to consumption. A study on the lactobacillus acidophilus and in commercial yogurt during refrigerated storage found that all the products tested showed a consistent decline in both acidophilus and while in storage.[29]

Taking probiotics with antibiotics has some positive benefits, such as relieving antibiotic-associated diarrhea.[31] On the other hand, antibiotics kill bacteria, and lactobacillus acidophilus is a form of bacteria.

Therefore, it is possible for antibiotics to kill some or all probiotics during treatment, in turn minimizing some of or eliminating the potential health benefits of acidophilus. When on a course of antibiotics, it’s recommended to take them either two hours before or after taking acidophilus or other probiotics.[32]

For people with weakened immune systems, the use of acidophilus should likely be avoided unless otherwise specified by a doctor. Lactobacillus acidophilus can grow too much in these individuals and lead to infection.[33] The same precautions should be taken for those with infection or intestinal damage. If you’re unsure, consult with your physician.

Aside from the relatively minor side effects and rare allergic reactions, lactobacillus acidophilus is thought to be generally safe and there is little harm in taking it.[34] 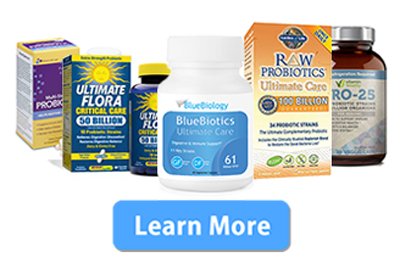