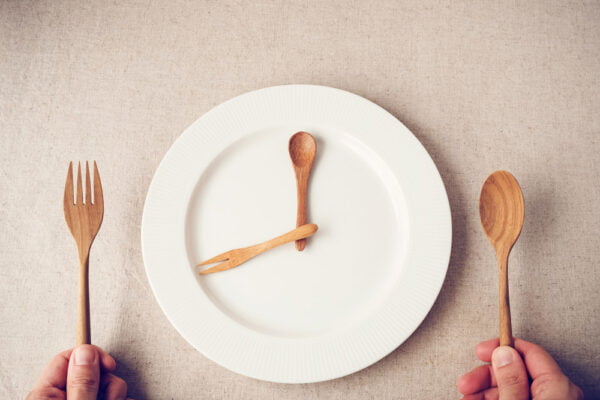 Intermittent fasting may sound like a new concept, but in actuality, it has been practiced for thousands of years and remains in use by cultures all across the globe. It is an umbrella term for the voluntary abstinence from food in short cycles of varying length, and it has gained popularity in recent years for its reported medicinal benefits.

Those who practice these types of diets report that intermittent fasting can help boost weight loss, as well as lower blood pressure and cholesterol. Here we investigate those claims to figure out the true benefits of intermittent fasting, and why certain people may be better off avoiding it.

How Does Intermittent Fasting Work?

When a meal is consumed, the macronutrients are broken down into glucose and absorbed through the intestinal wall into our bloodstream. From there they are transported to our organs where they play a key role as a main source of energy.

Excess glucose is taken in by the liver and stored in the form of glycogen to be released back into the bloodstream between meals when more energy is needed. Fasting leads to much lower blood sugar levels in the body, which requires the body to start using fat as an energy source instead of glucose. This process is called ketosis.

On average it typically takes 8-12 hours of fasting for our bodies to deplete our reserve of glycogen, although individuals who exercise or are very active can be depleted of glycogen in a much shorter time. If this fasted state is prolonged then those who adhere to the diet can see dramatic changes in weight as well as numerous other benefits.

Fasting has also been associated with a longer life span in animal studies. Recent research by Harvard University has suggested that this may be attributed to intermittent fasting allowing mitochondria, the energy producing mechanism of each cell, to remain in a youthful state and produce energy more efficiently.

Heart disease has been the leading cause of death globally for fifteen consecutive years. The various risk factors that can lead to an increased or decreased risk of developing heart disease, such as LDL cholesterol, blood triglycerides, blood sugar, and inflammation, have all been shown to be impacted heavily by diet.

A study by the National Institute on Aging Intramural Research suggests that intermittent fasting and caloric restriction can improve cardiovascular stress adaptation and increase heart rate variability. They speculated that the two primary mechanisms involved in this are reduced oxidative damage and increased cellular stress resistance. Researchers concluded that a better understanding of intermittent fasting could likely lead to new preventative and therapeutic methods for extending the human lifespan.

The Louisiana State University Medical Center performed an eight week study to determine the effects of an alternate day caloric restriction on inflammation and oxidative stress in overweight adults. Within two weeks of diet initiation, an increased quality of life was reported among patients. Antioxidant levels were increased, while levels of inflammation and oxidative stress significantly decreased.

Possible Side Effects of Intermittent Fasting

While intermittent fasting shows signs of huge potential, there is a certain part of the population that could complicate their existing health conditions by subscribing to a restrictive diet.

Dr. Suzanne Salamon, associate chief of gerontology at Harvard-affiliated Beth Israel Deaconess Medical Center, expressed the following concerns with intermittent fasting: “People who need to take their medications with food — to avoid nausea or stomach irritation — may not do well with fasting. Also, people who take heart or blood pressure medications may be more likely to suffer dangerous imbalances in potassium and sodium when they’re fasting.”

Diabetic patients should be especially cautious as it may be necessary for them to eat foods at certain times, and prescribed medication often affects blood sugar levels which fasting may interrupt.

Ultimately, any major dietary decisions should involve a consultation with a medical professional, but with the many minimally intrusive variants of intermittent fasting, there is likely an approach that can be tailored to fit individual needs.

That being said, those struggling with various health conditions could likely find relief through the benefits of intermittent fasting.